Under her left wrist Taylor sports the number 13. She was born on December 13th and claims that 13 is her lucky number. She has also been known to color in a large number 13 on the outside of her left hand with eyeliner and nail polish. There is speculation as to if the small number 13 on the inside of her wrist is just a temporary tatto or a permenant one. 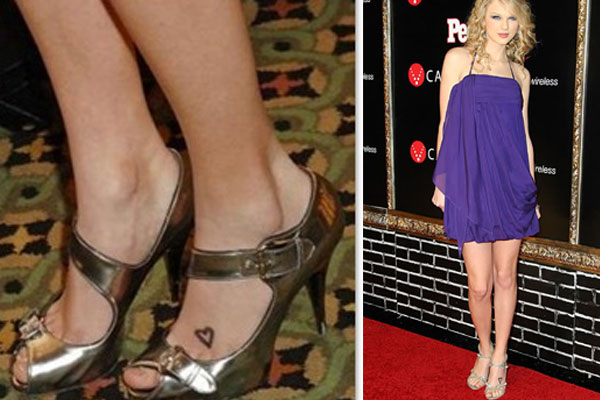 The heart tattoo is most likely a fake considering it is shown three times on her album sleeve always on her left foot. However on the “Our Song” video, it’s shown several times, always on her RIGHT foot. It should be noted that in both cases, the other foot is shown without a tattoo.

Sources say that Taylor admits that the tattoo is not real but that her and her team have all vowed to get a real heart tattoo on their left foot if her album goes double platinum. She admits that it’s a really huge number, “but if we get there with this album, I want to do something to commemorate it. haha.”

Along with the number 13 on the outside of the left hand Taylor Swift also is known to scribble lyrics of her favorit songs on her arm. Don’t worry moms, these are not real tattoos but temporary ones that the 20 something has been seen sporting at different events and shows.